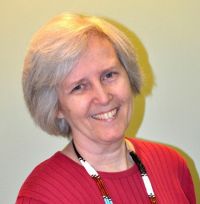 Dr. Wendy Ashmore long recognized as one of the foremost theoreticians in Maya archaeological research in the areas of archaeological settlement patterns, landscape studies, household archaeology, spatial studies and critical gender analysis, passed away peacefully on January 8, 2019 in Riverside, California after a long battle with two auto-immune diseases.

Wendy was born in Los Angeles, California on June 26, 1948; started school in Mexico City during the McCarthy years; and returned to Hollywood a year later. She received her B.A. in Anthropology (magna cum laude) from the University of California, Los Angeles in 1969 and her Ph.D. in 1981 from the University of Pennsylvania. Her dissertation, “Precolumbian Occupation at Quirigua, Guatemala: Settlement Patterns in a Classic Maya Center,” was the beginning of a research and publication record that kept breaking theoretical barriers to bring a deeper understanding of the complexity of Maya settlement patterns to the global archaeological community.  At the beginning of her career she was an assistant and associate professor of anthropology and a member of the graduate faculty of anthropology at Rutgers University, The State University of New Jersey. From 1981 to 1994 she served as both Research Associate, and Consulting Curator for the University Museum at Rutgers. In 1992 she moved to the department of anthropology at the University of Pennsylvania as an associate professor and Associate Curator, American Section, of the renowned University of Pennsylvania Museum. Ashmore joined the faculty of the anthropology department at UC Riverside where she stayed until she retired as Distinguished professor, Emerita in 2016.

Professor Ashmore was a giant in the field of Mesoamerican archaeology, publishing highly influential work throughout her career. She was a pioneer in the areas of settlement patterns, landscape, and household archaeology, pushing the field to consider the importance of symbolic behavior and more humanistic archaeological narratives before such approaches were considered standard. Her breakthrough volumes include Lowland Maya Settlement Patterns(1981),Household and Community in the Mesoamerican Past(edited with Richard R. Wilk, 1988), Archaeologies of Landscape: Contemporary Perspectives(edited with Bernard A. Knapp, 1999). After working at the important sites of Quirigua, Copan, and Paraiso in southeastern Mesoamerica, Professor Ashmore co-directed critical work at the site of Xunantunich, Belize that transformed how archaeologists working in this area of the world approach social questions surrounding daily life. In 2012 she received the Kidder Award from the American Anthropological Association (the flagship association for anthropologists), the 24threcipient of this honor in its first 62 years of existence and only the third woman. There are no higher accolades than this award in the field of archaeology.

In focusing her research on space and place in relation to production and reproduction at household and community levels, Wendy was one of the first archaeologists to draw on an emergent feminist anthropology. She theorized the contexts and content of gender relations and in doing so, contributed mightily to the conceptualization of gender and its importance in anthropological research. She wanted her students to consider gender not only as a lens for analyzing social hierarchies and relations, but as a politically charged framework for new theorization. She forged in her own work a shift from looking at gender as  categorization and a marker of a static division of labor to looking at the ways that gendering actually contributed to conceptualizations of landscape, the creation of place in conditions of disruption, and the spatiality of communities and households. In her more recent work she is remembered as one of the most important theorists in the field of feminist archaeology alongside women such as Elizabeth Brumfiel, an archaeologist who raised the voice in Maya archaeology about the absence of gender analysis. Wendy’s more recent work, in fact was a call to the field to actively prevent the erasure of the wider theoretical contributions of women archaeologists.

A stellar teacher and mentor, she was recognized by her receipt of the 2006-2007 UCR Academic Senate Distinguished Teaching Award and the 2008-2009 UCR Doctoral Dissertation/Mentor Award as well as her induction into the UCR Academy of Distinguished Teachers in 2013. Her textbook co-authored with Robert Sharer, Discovering Our Past: A Brief Introduction to Archaeology(the 6thedition was published in 2014), has been adopted for introductory courses to archaeology in numerous U.S. universities and beyond. Her mentorship was unparalleled and she is fondly remembered by the many former advisees who are now transforming the field as professionals themselves. Her legacy as a brilliant and transformative archaeologist continues through the many people whose lives she touched.

Wendy was also a central figure to American anthropology and archaeology through her service to the field. Through her nationally elected service to the American Anthropological Association (AAA) Executive Board, Committee on Scientific Communications, and Publications Committee she helped to forge the direction of the discipline and its relationship to disparate publics. She was widely appreciated for her cooperative, collaborative, and reasoned approach to volatile issues. Like her research, her service was grounded in careful preparation.  Given her strong reputation for exceptional service to the field Wendy was invited to serve on the editorial boards of a dozen scholarly presses—including both Cambridge University Press and Oxford University Press. This commitment to service was also strong at all levels in the UC system, including system-wide service on the University of California Press editorial committeeand campus-wide service in the Faculty Senate. Ashmore served on the Executive Committee of the Michael Kearney Memorial Fund of the Society for Applied Anthropology since its inception in 2011. It would be impossible to overstate the conscientiousness with which she approached her service work.  It was beyond exemplary.