The SfAA Podcast Project is a student-led initiative to provide audio records of sessions from the Annual Meetings to the public, free of charge. We strive to include a broad range of interests from diverse perspectives with the intent of extending conversations throughout the years. Our ultimate goal is to make these dialogues accessible to a global audience.

The SfAA Podcast Project uploads podcasts recorded at the Society for Applied Anthropology Annual Meeting. All podcasts are free to the public and we encourage you to come back often and listen to anthropologists in both the applied and academic realms. Click below to start your journey and listen to podcasts about health, the environment, social justice, education, business, and much more.

A Brief History of the Podcast Project

The SfAA Podcast Project began from a small remark at the 2005 Annual Meeting in Santa Fe, New Mexico. Torn between coinciding sessions, then-student Jen Cardew Kersey was discussing with her now-husband, Tim, which panel she should attend. He asked the simple question, ¨Why not listen to one of them afterwards?¨ As Jen tells it, this was a ridiculous idea. Anthropologists in 2005 did not record sessions. Everyone knew that.

Anthropologists in 2007, however, did. Jen rallied the support of a faculty advisor, Christina Wasson, and former SfAA Executive Director, Tom May (both of whom were an integral component to the Project´s success). The Podcast Project debuted at the 67th Annual Meeting, and has continued on for a decade.

Since 2007, the Podcast Project has published over 150 podcasts, has touched 6 continents, and has experienced over 110,000 views. As we continue to grow and improve, we pay special tribute to Jen Cardew Kersey, Christina Wasson, Tom May, the many SfAA contributors, and to the 10 years of student volunteers who have made this project successful.

An Interview with Our Founder

Kenneth Saintonge is a third year M. S. student of Applied Anthropology at the University

of North Texas. He is interested in the intersection of Design Anthropology, Digital Anthropology and Material Culture. He received a B. A. of Visual Arts from Eastern Connecticut State University, with a double concentration in Studio Sculpture and Art History. He has been involved with community and public outreach through various organizations that promote local artistic and cultural development. Presently volunteering with the Texas Parks and Wildlife Department as an AmeriCorps VISTA.

DID YOU KNOW?
On a break from his academic career, Kenneth spent this time as a freelance Makeup Artist, specializing in special FX in theatrical costume design.

Beth is a second-year online M.S. student in Applied Anthropology at the University o

f North Texas. After graduating with a B.S. in Psychology from Mississippi College in 1993, she moved to Alabama to begin her career in medical social work in hospitals and nursing homes. She returned to the MS Gulf Coast in 1998, continuing her work in social services until Katrina in 2005 closed the hospital where she worked. Taking this opportunity to expand into other fields of interests, she opened her own interior design company, helping businesses and families rebuild after the storm. These experiences have prepared her to pursue her passion of creative problem-solving through ethnographic research that will intersect medical, design, and business anthropology.
Contact Beth at Ethnobeth@gmail.com

DID YOU KNOW?
Beth completed the run Disney Coast-to-Coast Challenge, running two half-marathons in Disneyland and in Disney World in 2014. It’s all about the Bling! 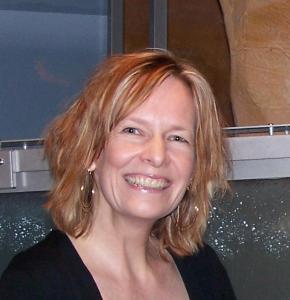 . She has been the UNT Advisor for the SfAA Podcast Project since Jen Kersey first developed the idea.  In her research, she studies virtual communication, collaboration, and community-building processes, so of course, she loved Jen’s idea!  She teaches classes in design anthropology and linguistic anthropology. For more information, see http://courses.unt.edu/cwasson/.

DID YOU KNOW?
Christina’s dog Mingo can tell you how old someone is. He barks once for each year of their age. For people over 10, it’s best to ask for each digit of their age separately.
https://www.christinawasson.com 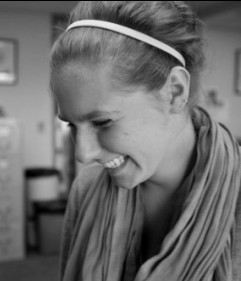 r's degrees in Applied Anthropology and Public Health. Claire is a native North Carolinian who moved to the northeast to study Cultural Anthropology and Spanish Literature at the University of Pittsburgh. Her undergrad research focused on understanding veteran identity and the role of non-profits in assisting veterans transition to civilian life after service.
Contact Claire at claire.deahl@my.unt.edu

DID YOU KNOW?
After college, she served in the AmeriCorps program City Year at North High School in Denver, CO.

ty of North Texas. Gigi was smitten with anthropology when she met two consumer anthropologists while working as a research strategist in an advertising agency in San Francisco. It was at this point that Gigi fell deeply, madly in love with anthropology. As a mid-career advertising professional, Gigi returned to grad school in search of anthropology theory and community. Her thesis is on the cultural construction of identity as expressed through health and brands.
Contact Gigi at gigi.taylor@gmail.com

DID YOU KNOW?
Gigi worked as a radio announcer at KJCO, a Colorado radio station during college.  She was the afternoon DJ during the MOR (Middle of the Road) musical format.

Sarah is in her first year at the University of North Texas studying for a master's degree in Applied Anthropology. Sarah received her bachelor's degree in anthropology with minors in social sciences and French, also from the University of North Texas. Her research interests include anthropology of design and technology, human-environment interactions, work with non-profits, and the intersections of all the above.
Contact Sarah at sarahstutts@my.unt.edu

DID YOU KNOW?
After living abroad in Southern France for a year, Sarah became fluent in French and is currently pursing other languages as well.

t the University of North Texas. She recently received a B.S. in Anthropology from Southern Illinois University Edwardsville. Shannon spent a few years working with domestic and exotic animals in vet clinics, zoos and wildlife sanctuaries. She served two years in Americorps doing conservation work in Nevada and disaster recovery in New Orleans. She directed a disaster recovery organization in San Marcos, TX following the Memorial Day floods of 2015. Her research interests include disaster response and recovery, immigration/displacement, and in a broader context, the environment.
Contact Shannon at shannoncronin@my.unt.edu.

Did you know?
Shannon once worked with Oscar, a two-toed sloth with a fondness for sweet potatoes.

Randy started in the Motion Picture business back in 1997 for Kodak.  In 2003 he bega 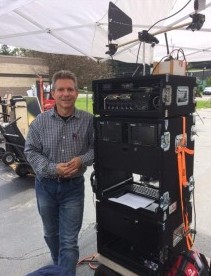 n his own Location Sound Engineer business.  He has worked on many different types of film and HD Video productions including NFL Films, regional commercials, Indie Feature films, TV Shows including House Hunters, Say YES to the Dress, Travel Channel shows and many others. His goal is to always exceed his clients' expectations and to perform in the most professional way. He always has a great time with the SfAA team! That’s why he has been doing it for so many years!  In the photo above, Randy is working for the Travel Channel in New York in August of 2016. For more information about Randy and his capabilities – please visit: http://www.regionalsightandsound.com.
Contact Randy at randysoundman@mac.com

DID YOU KNOW?
At one point in Randy’s life (just a few years ago) he and his family had 4 dogs ranging from a 12-pound little mutt to a 100 pound Great Dane.

David started in the A/V when he was 15, shooting live events. After graduating college, h

e started work for a production company and there he realized his passion for all things sound. He has worked many different projects, from national commercials, to documentaries and TV shows. He's always interested in how audio can be used to better communicate in any facet.
Contact David at davidwerner15@gmail.com

DID YOU KNOW?
David met Puff Daddy. On Puff's birthday, no less.

Caitlin Griffith is a native Texan that has a passion for environmental and advocacy anthropology.  She is interested in podcasting because she enjoys learning and sharing knowledge with others!

Tabia is a sophomore cultural anthropology student at Reed College with an interest in social movements and storytelling.  Born in Germany, her family has now lived in Eugen, OR for almost ten years.  She loves podcasting because it makes stories and information available to everyone in a way that engages one's imagination.  She finds podcasting to be an exciting medium in anthropology because it makes often inaccessible knowledge publicy and easily availabe, and is a way to get people to look at issues they care about in a way they never had before; through an anthropological lens. 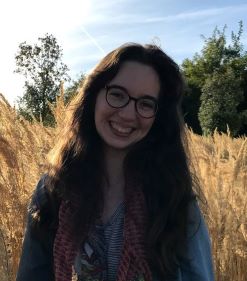 Guin Wright is from Kansas City, MO and attends Reed College in Portland, OR where she is pursuing an interdisciplinary major in Anthropology and French Literature.  She is excited about podcasting because it is a creative and open access medium with the potential to propel anthropology out of the bubble and into the world at large, thus opening up its questions to anyone and everyone.

If you have any questions or comments for the SfAA Podcast Project please send us an email at sfaapodcasts@gmail.com.

FIND US ON SOCIAL MEDIA!