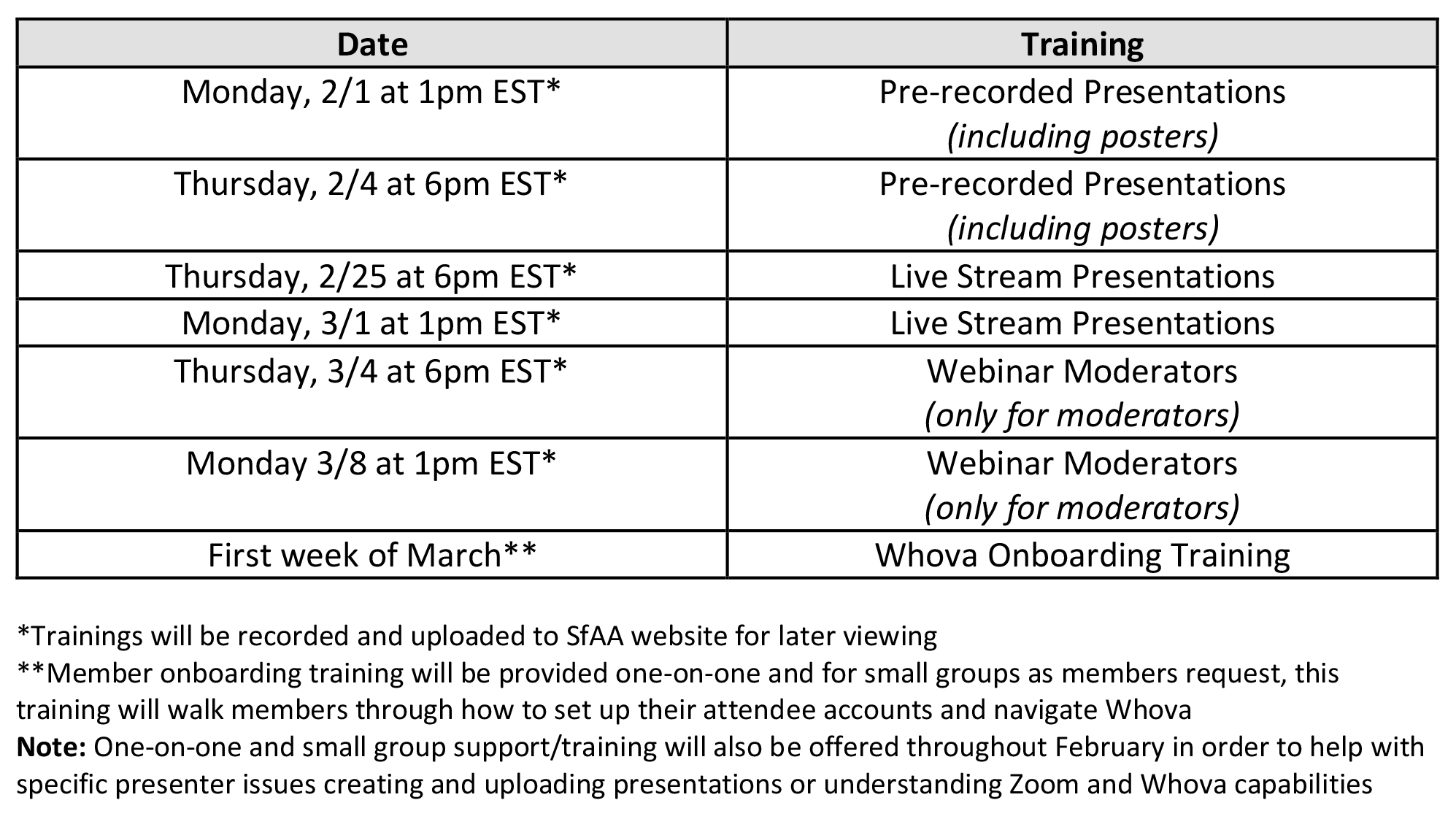 Because of the ongoing uncertainties of the pandemic and out of concern for our members and annual meeting attendees, we have decided to eliminate the onsite portion of the 2021 SfAA Annual Meeting, March 23-27. All sessions will be virtual, and we anticipate a robust and engaging conference. For those who indicated that they wished to present onsite, we will be reaching out to you about moving your presentations online.

Although we will miss seeing you in person again, we are excited about the virtual annual meeting and all it has to offer. Thank you for your continued support during these challenging times.

Reconnecting with old friends, making new ones, and networking are among the most important—and valued—aspects of our annual meeting. Recognizing this vital function, SfAA will provide online social gatherings to registrants around the world. These will include opportunities to discuss session content, connect with TIGS, and meet both one-on-one and in small groups. SfAA will also encourage members to engage in social media conversations and postings.

The Society for Applied Anthropology prides itself on being international, and we want to engage even more colleagues around the world in the society and its annual meeting. Now that the meeting has changed to virtual we believe this offers exciting opportunities for increased global participation for scholars and practitioners. To increase international participation, the SfAA Board of Directors has approved a reduced registration fee of $80 for new international participants.

Norfolk, Virginia, exemplifies how local communities and polities are linked to multiple social, cultural, and physical ecologies.  It is part of the larger Hampton Roads metropolitan area that includes the cities of Virginia Beach and Newport News, VA. The area contains one of the world’s largest natural harbors, where the Elizabeth, Nansemond, James, and other rivers empty into the Chesapeake Bay and then the Atlantic Ocean.  As a major coastal watershed, Hampton Roads is highly vulnerable to climate change, which could affect coastal and marine ecosystems as well as the significant and growing tourist economy of Virginia Beach.  Shipping and shipyards are major industries, which are subject to the vagaries and fluctuations of global markets, with resulting impacts on local communities.  The region is home to a major naval base (Naval Station Norfolk), a major air base (Langley Air Force Base in Hampton), a significant shipyard (Newport News Shipyard), and a railroad terminal for coal to be shipped from the harbor to global markets.  Hampton Roads has a deep history, reflected in the major colonial historical sites of Williamsburg and Jamestown and Hampton University, a historically black college/university.  Its cultural richness is also manifest in historic African-American communities, a growing migrant Latinx population (including an influx of Puerto Ricans after the hurricanes), and nearby Nottoway and Nansemond indigenous communities.  Norfolk and the Hampton Roads area are situated within the Tidewater region of southeastern Virginia and parts of North Carolina, which has been called one of America’s eleven distinct cultural regions.

Norfolk is therefore an ideal setting for anthropologists and other social scientists to engage in broad and multivalent analyses that integrate people, geography, and sociopolitical structures in domestic or international settings.  What tools and methods can we offer to link these multiple spheres of action?  Are local, global, and geographic factors implicated in economic precarity and health disparities?  Has social science adequately addressed health issues relevant to military populations, including family stress, trauma, PTSD, and veterans’ health?  If major social and economic nodes draw new populations into an area, how do they interact with groups that have been there for generations?  How is immigration associated with community change?  In what ways are different populations and economic interests treating the imminent threat of climate change?  Are local cultures and languages being preserved in communities reshaped by global forces and trends?  How do constructions and discourses of race and ethnicity play out in the interplay of social, cultural, and physical ecologies?

Tuesday, the first day of the meeting, will focus on Hampton Roads and surrounding areas, and will include sessions on such topics as: local responses to climate change; military health; labor migration and the interaction of migrants with longstanding populations; the impact of global markets and politics on local economies; the ramifications of tourism; and how the region’s deep historical roots intertwine with contemporary trends and representations.

In recent months, the world has witnessed a stunning confluence of crises. The health and economic impacts of COVID-19 and the continued widespread calls for an end to structural violence and racism are reverberating throughout the communities where we live and work. These developments compound the existing strains from climate change, migration politics, social inequalities, and so much more. At the 2021 meeting, we will engage with these issues and many others of longstanding concern – both in Norfolk and globally.

Our annual meeting aims to provide an exciting, innovative, and accessible opportunity to feature and examine the vital contributions of applied social sciences to the issues of our day.

We look forward to being in conversation with our members and registrants in the coming months and putting on a fantastic conference in 2021!

The Society for Applied Anthropolgy has invited cognate professional associations to join as co-sponsors in the Annual Meeting. Those groups who have accepted the invitation are now working actively with the Program Chair on the content of the sessions. The groups include:

The Council on Nursing and Anthropology (CONAA) is an organization that brings together nurses, anthropologists and others interested in understanding and promoting the health of peoples and cultures around the world through research and practice innovations. Common interests of CONAA members are basic and applied health research, improved health care for vulnerable populations, and encouraging cultural and social justice content in education and research. CONAA holds yearly business meetings at SfAA followed by informal receptions for networking and mutual support. For more information about CONAA, visit http://www.conaa.org.

The Culture & Agriculture (C&A) Section of the American Anthropological Association (AAA) aims to develop the study and understanding of agrarian systems from a holistic, social science perspective, and to link academics and practitioners concerned with agrarian issues, agricultural development, and agricultural systems through dissemination of scientific research, encouragement of effective instruction, and to encourage application of knowledge to public policy.

EPIC promotes the use of ethnographic principles to create business value and brings conceptual leadership and practical skills to the problems and opportunities faced by organizations, markets, and society. EPIC people draw on the immense expertise of our global community to learn, connect, and develop as professionals, amplifying our impact together. We are practitioners who work to ensure that innovation, strategies, processes, and products are anchored in deep understandings of people and their everyday lives. Our community hails from all kinds of organizations and industries—technology corporations, product and service companies, a range of consultancies, universities and design schools, government and NGOs, and research institutes. EPIC people draw on tools and resources from the social sciences, humanities, data analytics, design, agile, scenario planning and other approaches to realize value for business and communities.

The Political Ecology Society (PESO) has as its object the promotion of interdisciplinary scientific investigation of the political and economic principles controlling the relations of human beings to one another and to the environment. As part of its efforts to meet these goals, PESO supports the publication of the Journal of Political Ecology, a peer reviewed electronic journal that publishes articles and reviews in English, French, and Spanish.

The Society for Anthropological Sciences (SAS) was organised to promote empirical research and social science in anthropology. The members of SAS want to further the development of anthropological science as empirical knowledge based on testable theory, sound research design and systematic methods for the collection and analysis of data. We seek to fulfill the historic mission of anthropology to describe and explain the range of variation in human biology, society, and culture across time and space.

The Society for Disability Studies (SDS) is a scholarly organization dedicated to promoting disability studies. More than twenty-five years of rich history has enabled the organization to reach national and international members with expertise ranging from advocacy to perspectives on disability from a variety of disciplines.