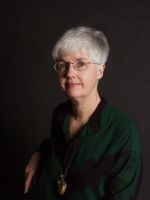 Kathy M’Closkey, Adjunct Associate Professor at the University of Windsor, ON, was recently given two awards in recognition of her research and activism. The Navajo board of Dine’ Studies granted her the “Excellence in Diné Studies” award during the 21stconference held at Diné College, Tsaile, AZ last October.

The board expressed their appreciation by presenting her with a beautiful ‘plate’ designed and painted by Acoma potter Sherry Aragon.

The second award for “human rights and social justice,” was granted by the Office of Human Rights, Equity and Accessibility at the University of Windsor during their annual open house December 7, 2018.

Kathy’s forthcoming book Why the Navajo Blanket Became a Rug: Excavating the Lost Heritage of Globalization (UNM Press), repositions weavers and woolgrowers within a globalization and neoliberalism framework. Her extensive research, based on archival documents contained in traders' and regional wholesalers’ business records and correspondence, reveals that after 1893, free trade in carpet wool drove production, accelerating the transformation from wearing blanket to rug. The book reveals remarkable parallels between the under-researched history of Diné weavers and woolgrowers, and dilemmas confronting Indigenous producers worldwide, coping with globalization, subsistence insecurity, and “development.” Currently over 20,000 weavers encounter “double jeopardy” due to the competition stimulated by the investment market for the pre-1960 textiles, in tandem with the “knock-offs” imported from twenty countries. Sales of knock-offs are perfectly legal under the federal Indian Arts and Crafts Board Act, a truth-in-advertising act that protects consumers, not producers. As livestock owners and weavers, women were doubly disadvantaged by changes to the domestic wool tariff, coupled with patriarchal conventions which obliterated their contributions to subsidizing the reservation economy for eighty years. The disenfranchisement of thousands of Navajos occurred as a result of an earlier wave of neoliberalism, highlighting the consequences of the invisibility of women’s non-waged labor.