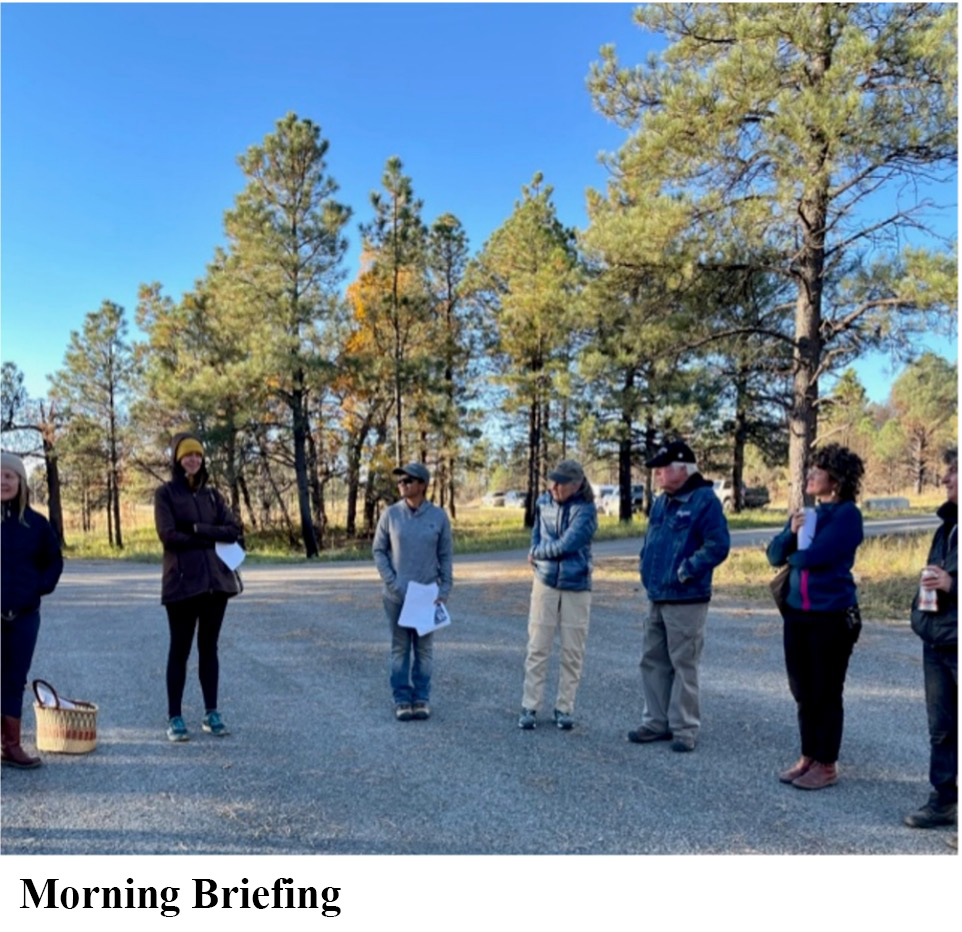 collecting workshop that took place in and around Las Dispensas. I joined friends and other landowners who were impacted by the Calf Canyon/Hermit’s Peak Fire and subsequent flooding off the burn scar (see August’s SfAA News https://www.appliedanthro.org/publications/news/august-2022/editors for more information about the social, cultural, economic, and biotic impacts).  To restore the land and forest, Luna Community College along with New the New Mexico Forest and Watershed Restoration Institute, housed at New Mexico Highlands University have been offering free workshops called “Querencia in Action: Post-Fire Land Restoration” to revitalize the natural vegetation and address soil erosion. This is a community-based effort that started in July 2022 and is ongoing. All the workshops are held on private lands in the impacted areas of New Mexico’s San Miguel and Mora counties. The October 20th workshop focused on seed harvesting of local natural grasses. 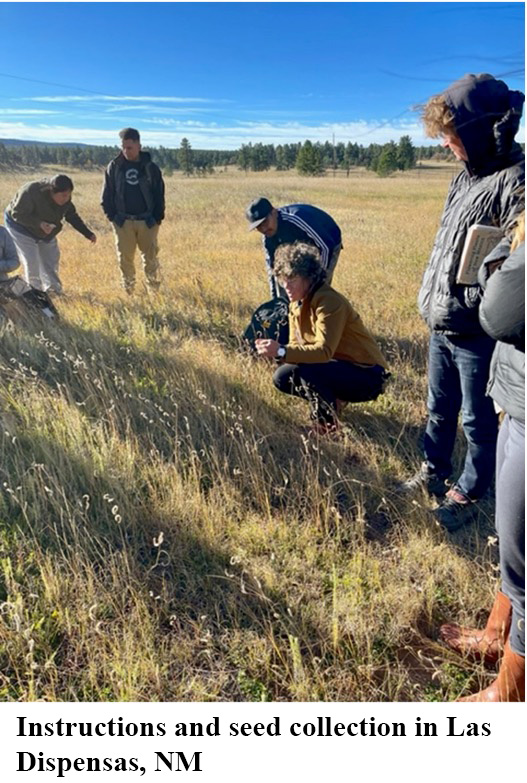 natural resources and the subsistence practices they support makes it impossible for people (mainly Hispanos who are descendants of the conquistadors) and communities to support themselves.  Fire-generated out-migration is on the rise and further exacerbates preexisting economic vulnerability and add strain to a shrinking workforce. The economic, biotic, and related sociocultural will have lasting effects on the fire-impacted communities as they attempt to rebuild homes, livelihoods, and a unique regional culture.

Since July, the Querencia in Action: Post-Fire Land Restoration community-based project has been facilitated and supported a series of workshops and technical training for landowner that are designed to achieve a number of goals.

Per Shantini Ramakrishnan, the workshops will continue as long as landowners are interested. The workshops will also provide foundations for a future certification programs and train residents to lead the long-term recovery work. 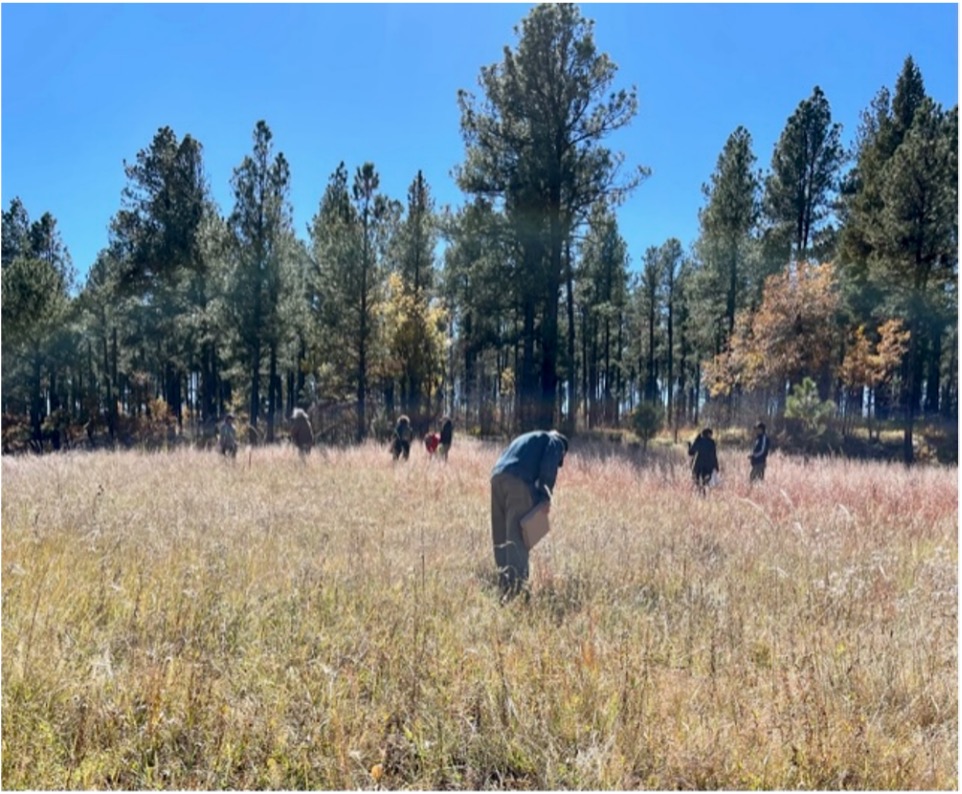 If you wish to support these efforts, please use the link to the "Fire Relief Fund" at the Las Vegas Community Foundation, https://www.lvnmcf.com/hermits-peak-wildfire-relief-fund-2/. This is non-profit community-base organization that hopes to establish another fund soon dedicated towards the Long Term Recovery Group. This is the best option for donations. In addition, you may contact Shantini Ramakrishnan shantinir@nmhu.edu for information about how to support the Conservation Science Center.
Down the road from the fires, Pecos National Historic Park was spared the burn and much of the flooding.  My  (Jeanne’s) season working at the Park is coming to an end. For those of you familiar with southwestern archaeology, Pecos is the site of A.V. Kidder’s famous dig, which yielded the Pecos Pottery classification. Kidder was from the first generation of trained archies, bringing skills to the excavation that he acquired at Harvard University.

Back in the late 70s, I can remember asking my Southwest archeology professor Rich Pailes what the difference was between the cowboy traders and the early archeologists. The former, like Richard Wetherill, dug in sites and sold what was found to the best bidder.  The latter, like Kidder, got a grant from some east coast university, museum or foundation, excavated, and sent the artifacts back to the museum.

Here at Pecos, working from 1914 to 1925, Kidder excavated the midden and sent almost 2000 human remains to the Peabody in Massachusetts.  There they sat for at least sixty years, with some analysis in 1930 and a revisit in the 90s. In 1990, with the passage of NAGPRA, it became possible for Jemez Pueblo, which absorbed the last Pecos Pueblo survivors in 1835, to request repatriation of the remains to the Park.  On May 23, 1999, the ancestors were returned and reburied, along with some of the grave goods that had been buried with them. It was the largest repatriation in US history.

The story of indigenous cultures is imprisoned in museums and institutions worldwide.  This week, surfing You Tube, I encountered a broadcast of John Oliver’s HBO show “Last Week Tonight” focusing on museums ( see https://youtu.be/eJPLiT1kCSM ). Oliver begins at what I’ve always called the British Museum of Imperial Booty.   After interviewing a number of British and French officials who justify museum collections, the program visits the Chicago Field Museum. A delegation of Native Americans gets to see tribal items that have been sequestered there for years. They do not look pleased.

Pecos is reconfiguring its museum this winter. The new one will tell a more complete story of the lands and people.  It will finally include the story of the repatriation. After living at the site for the last three months, I think the ancestors are at rest.