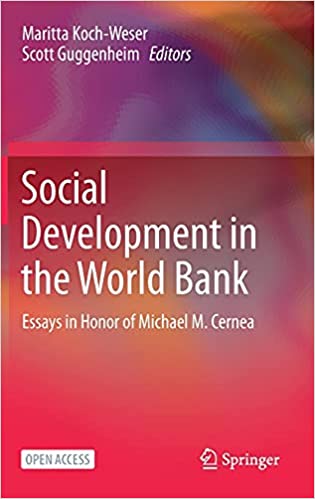 Social Development in the World Bank:  Essays in Honor of Michael M. Cernea

A long-time member of AAA, SfAA and WAPA (the Washington Association of Professional Anthropologists), Michael Cernea was the first in-house social scientist hired by the World Bank and is widely  known as a pioneer and steady leader in introducing sociological and anthropological knowledge in financially induced development.  Cernea proposed and authored some of the first social development policies at the World Bank which were replicated by other major development agencies. These policies were focused on preventing or mitigating serious dysfunctional effects of development. Among these, he formulated the first ever policy on forced population displacement and resettlement adopted by the World Bank, which was subsequently also adopted by all multilateral development banks and by various governments.

Michael Cernea’s decades as the leading sociologist/ anthropologist at the World Bank provided him with a platform to promote many research studies by social scientists from developing and developed countries.  His own work proved so important to the Bank’s impact in reducing poverty around the word, that with his help, the Bank developed their own large community of anthropologists and sociologists to enhance this perspective to their projects.   In collaboration with the Bank, Cernea introduced social methodologies that increased the benefits of development and improved the lives of countless people in developing countries.

To honor Michael Cernea’s contributions to development theory and to action-policies, two anthropologists and veterans of the World Bank,  Marita Koch-Weser (Germany) and Scott Guggenheim (USA) have organized and edited a Festsschrift,    It  is  comprised of studies and  essays written by scholars and development leaders from the USA, and other European and Asian countries.  Their studies and essays analyze and examine, most of them  from an insider’s perspective, how the social scientists contributed to changing  the development paradigm of the World Bank from an almost exclusive concentration on economic growth to an equally  serious consideration of  social development.

The book, published by Springer International (Switzerland) became available in January 2021 in several formats:  in hard copy, as an e-book and also through open access and in a special e-book soft cover edition, it will certainly become a classic in the field.  It is a fitting bookend to Cernea’s volume,  Putting People First, origianlly published in 1985 and subsequently published and translated into six languages and two editions.