The Last Bonesetter: An Encounter with Don Felipe 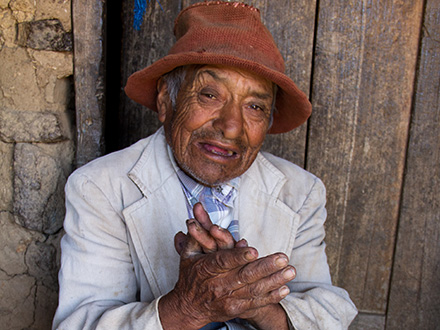 Framed in striking panoramas of the high Andes in Peru, The Last Bonesetter profiles Don Felipe, one of the last healers in his region of the Andes. Bonesetters (hueseros) are key healers who use a combination of massage and herbal remedies to treat a range of musculoskeletal problems. He also serves as a midwife and herbal healer of illnesses such as susto, a widely known folk illness in the Americas that takes particular form in the Andes. The film opens with Don Felipe boiling water to make an herbal remedy for one of his patients.

Narrated by Kathryn Oths, a well-known medical anthropologist who has worked in this region of the Andes for several decades, the film both provides a revealing portrait of Don Felipe and of health and healing in this region of Peru. Don Felipe, who is a lively 80 year old, remains as one of the last healers in the region. Healers have disappeared from the high Andean region due to economic decline and climate change; young people have left the highlands for the cities to find work. Don Felipe serves as one of the last sources of health care in the region. Even though the Peruvian government built a health outpost in the town, it is seldom staffed by a medical professional and has few medicines. Don Felipe has expanded his practice to tend to a wide range of health problems and is one of the most trusted healers in the region.

One of the key goals of the film is to save the knowledge of bonesetting, and healing more broadly, by bringing attention to Don Felipe’s art to a wider audience both locally and internationally. The centerpiece of that effort is a two day workshop that Dr. Oths organizes in a regional hospital. The workshop is attended by local people and by healers and physicians from Lima, the capital city of Peru on the coast. Dr. Oths introduces Don Felipe as “un huesero distinguido, un tesoro nacional” (a distinguished bonesetter, a national treasure). Echoing the ways that folk artists have been named as national treasures in the Americas, Dr. Oths highlights both the skill of Don Felipe and the urgency of training a younger generation of healers.

During the workshop, Don Felipe treats different participants’ ailments both physically and spiritually. Then a dramatic switch happens. Don Felipe becomes the patient; his healers are a family of bonesetters from Lima, including their young son. By Don Felipe becoming the patient, the film makes several key points. Healers need healing as well. What happens when there are no longer any healers left? In Lima, at least, this bonesetter family has engaged their son in their practice and are modelling how to pass this healing art down through the generations.

Don Felipe is an engaging focus of the film. His ability to diagnose and treat injuries is impressive. He knows when to be gentle and when to use his surprising strength to adjust a variety of injuries. He speaks movingly of his history of practice in the region and passionately about the need to train a new generation of healers. The film does not resolve this issue and no apprentices emerge.

The film is striking visually as it uses the dramatic vistas of the high Andes as effective background to the narrative. It successfully conveys both the beauty and challenges of living at the top of the world.

The film follows in the tradition of Eduardo the Healer (1978) that has become a classic in visual anthropology about healing in Latin America, specifically Peru. The Last Bonesetter provides a contemporary view of traditional healing in Peru in a more usable and visually more striking format. The film is an excellent resource for classes in medical anthropology. The film provides students with rich visual examples of healing through the work of Don Felipe. At the same time, it contextualizes his work in the crisis of traditional healing in the Andes. It also links that crisis to broader social and environmental changes, most specifically climate change. The film includes an extra feature that focus on the impacts of climate change in the high Andes (7 minutes). The film presents an innovative workshop that links traditional healers and biomedical practitioners in learning about bonesetting. The workshop serves as a model of how medical anthropologists can engage the broader health care system in learning about and integrating with traditional healing. The film can be complemented with readings from Prof. Oths’ book Healing by Hand: manual medicine and bonesetting in global perspective (2004). Overall, The Last Bonesetter serves as a moving call for the urgency of preserving folk health in many parts of the world, of addressing the impacts of climate change in the Andes, and to medical anthropologists to be engaged in these processes.