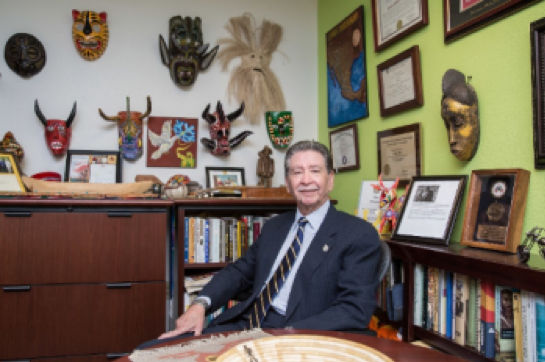 Carlos Velez-Ibáñez is the recipient of the American Anthropological Association’s  2020 Franz Boas Award for Exemplary Service to Anthropology. This award is presented annually by the AAA to a member whose career demonstrates extraordinary service to the anthropological profession.

Carlos  is a Regents Professor and the Motorola Presidential Professor of Neighborhood Revitalization in the School of Transborder Studies and a Regents Professor of in the School of Human Evolution and Social Change at Arizona State University. His numerous honors include the 2004 Robert B. Textor and Family Prize for Excellence in Anticipatory Anthropology and the 2003 Bronislaw Malinowski Medal. Vélez-Ibáñez was elected fellow of the American Association for the Advancement of Science in 1994 and was named as a corresponding member of the Mexican Academy of Sciences (Miembro Correspondiente de la Academia Mexicana de Ciencias) in 2015, the only American anthropologist so selected.  He is a member of the Board of Directors of the Society for Applied Anthropology and has served SfAA for numerous years.

He is the author of five University of Arizona Press books, including Border Visions, Hegemonies of Language and Their Discontents, An Impossible Living in a Transborder World, and The U.S.-Mexico Transborder Region. His forthcoming book, Reflections of a Transborder Anthropologist, explores Vélez-Ibáñez’s development as a scholar and in so doing the development of the interdisciplinary fields of transborder and applied anthropology, a critical area of study and existence. His emphasis is on uncovering how certain populations are able to survive and excel. Three of his books have been translated into Spanish.

The Franz Boas Award for Exemplary Service to Anthropology was established b AAA in 1976. Service to the Association is commonly recognized, as are outstanding applications of anthropological knowledge to improving the human condition. Great teachers of anthropology at all levels have received this award. Although the activities of the recipients will vary from year to year, all awardees have made many sacrifices, usually without personal reward, and sometimes against personal safety. They have all used anthropology for the benefit of others.

In a time of international and national chaos, the transborder region faces exceptional challenges and working to understand these is a step towards solving them.  Congratulations, Carlos.