The Odyssey of Pertti "Bert" Pelto 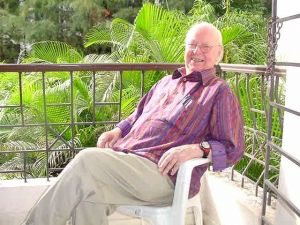 When Bert arrived at the University of Connecticut in 1969 from faculty appointments at U. Minnesota and Washington University St. Louis, his first methodology book, (Anthropological Research: the Structure of Inquiry) was almost completed and he had established a reputation as a serious, ‘hands-on’ tutor and implementer of rigorous research in field settings.  His research and publications on socio-economic change in Finnish Lapland demonstrated his research accomplishments in Circumpolar research.  And, he had already trained students in applied field schools in Northern Minnesota and Mexico.

The story begins, as Bert described it, with a childhood in a bilingual and bicultural family setting (Finnish-American), “strengthened by my parents’ frequent communications with persons in their homeland”.   This cosmopolitan background, however, was not necessarily reinforced in undergraduate school.  In fact,  “Washington State College…was known…as the ‘cow college’ at the time.”  And despite his selection to Phi Beta Kappa, “I never saw a sign of a counselor, didn’t know what graduate school was all about”, and had little idea of where graduates in economics go for employment…For about a year after graduating, I drove a bread truck in Portland, Oregon.”

The outbreak of the Korean War in 1950 led to a draft notice from the U.S. Army and an abrupt occupational change.  Among other things, military service forced him to “think seriously about getting more education”, and quite fortuitously, he encountered and digested Clyde Kluckhohn’s, Mirror for Man.  “I was astonished to learn about the field of anthropology and felt that was the kind of study I should have been doing as an undergraduate.”

His discharge from the military led to graduate school at Berkeley and the opening of new and important vistas.  At the time, he recalled, graduate students understood that a paradigm shift was underway - structural functionalism, applied, and culture/personality were crowding out “good old-fashioned ethnographic field work.”  By the mid-1950’s, he had decided to do his doctoral research in Finnish Lapland “because I was intent on developing the Finnish side of my dual cultural    identity.”

His first academic appointment at Cornell exposed him to colleagues who were using statistical analysis to assess behavior and this encouraged his grasp of numerical analysis and hypothesis testing.  This provided the opportunity to refine his interest in research methods and to further his inclination toward applied anthropology.

Bert was recruited to the University of Minnesota in 1963 where he found an ideal setting for refining his interest in research methods and developing a cohort of students in his six years of residence.  Funded field training opportunities quickly emerged in Northern Minnesota among rural and reservation communities and in rapidly transforming rural communities in Mexico, and this encouraged his exploration of different approaches to research and the development of an eclectic repertoire of research methods, designs, and tools

An unexpected opportunity surfaced in 1967, when Bert was invited to study the impact of technological change in Finnish Lapland.  The introduction of snowmobiles was changing in significant ways the system of reindeer herding.  The results of the study (The Snowmobile Revolution) were published in 1972, and reaffirmed his interest in the interplay between technology and social change.

In 1969, he was recruited to the University of Connecticut.  The first edition of Anthropological Research was published the following year and the second, with Gretel Pelto, in 1978. Bert was instrumental in championing the need for research methods training in anthropology, leading to the establishment of the NSF training program, currently headed by Russ Bernard. He soon began an association with the University Medical School’s Department of Community Medicine, and helped to establish the Hispanic Health Council, an NGO working towards improving the health of Latinos in Hartford with Jean and Steve Schensul, spurring anthropological interest in action research. Bert trained some of the most influential contemporary scholars in Medical Anthropology during his tenure at Minnesota and UConn. Today the Medical Anthropology Program at Connecticut has three faculty members and continues to promote research methods, in-depth understanding of health and illness as bio-social-psychological-cultural issues, interdisciplinary engagement, and redress of health disparities domestically and globally.

Bert retired from UConn in 1992 and began a new career providing research training in qualitative methods and reproductive health as a part of a Ford Foundation program of technical assistance for NGOs and educational institutions  throughout India.  He is well known for establishing the legitimacy and importance of qualitative research methods in Indian social research. Multiple requests for workshops and consultation in health related field research have encouraged his continuing residence in India for two decades with brief annual visits back to the U.S. His work in training non-anthropologists in qualitative research in India led to the publication of Applied Ethnography: Guidelines for Field Research (2013, Left Coast Press).

Bert’s half century of scholarship, mentoring, and leadership has inspired us to create this award, which will bring international applied researchers to SfAA meetings in the U.S. who could not otherwise afford to come. The formation of the Reindeer Herder Society honors Bert’s role in shaping applied medical anthropology, sharing his knowledge with students, researchers and practitioners.