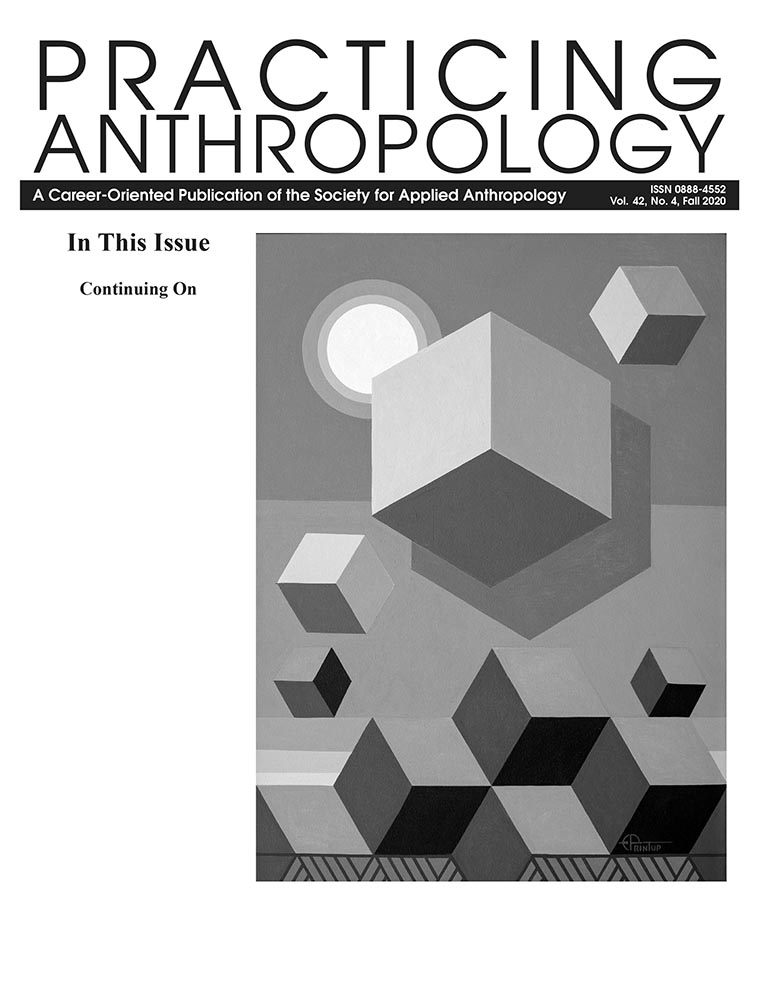 Practicing Anthropology is a career-oriented publication of the Society for Applied Anthropology. Its overall goals are:

Practicing Anthropology (PA) is a career-oriented publication of the Society for Applied Anthropology.  PA strives to be a participatory publication.  Authors are invited to submit special issues and individual articles for review.

All contributions published in Practicing Anthropology reflect the views of the authors and not necessarily viewpoints adopted by The Society for Applied Anthropology, the institutions with which the authors are affiliated, or the organizations involved in the journal's production.

We encourage you to visit the Practicing Anthropology blog at practicinganthropology.sfaa.net/ for up to date information on guidelines for authors, blog posts about recent articles, and news items of interest.

Articles, Photos, and Other Materials

Write articles for PA in an interesting style that maintains readers’ attention. The length should be roughly 3,000- 4,200 words including all bios, references and tables (if applicable). The number of references should not exceed 12. Citations should be in Chicago Manual style. Please insert page numbers. Include:

We prefer articles written in first person narrative style with no passive voice.

We do accept and encourage visual images to accompany submissions. Submit images with filenames and add [figure 1] etc. within the manuscript to show where the images should appear. Photos should be submitted in the .gif or .jpeg format. Please make sure that we have captions for your photos. Captions should be included at the end of the Word manuscript file.

Submit manuscripts and accompanying material to the submissions manager.

Practicing Anthropology is now accepting submission of creative work written by anthropologists and collaborators. Creative submissions should relate in some way to social scientists conducting fieldwork and/or engaging in the practice of ethnographic and mixed-methods research.

Submissions can be visual pieces, flash fiction, non-fiction, fieldnotes/field notes, first person reflections or narratives, poetry, children’s stories, or other creations. Written work should be brief and may not exceed 3,500 words.

Creators of accepted pieces will maintain a Creative Commons License allowing for reprints and use with a note that it was published first in Practicing Anthropology.

Include relevant information on permissions including photo release and informed consent documentation if the submitted piece was created within the context of fieldwork.

Send creative submissions, accompanying images where applicable, and a picture of the author[s] through our submission manager, here. If you have any questions during the process, please send an email to practicinganthropology@gmail.com with the heading Creative Submission. We will respond to your inquiry as quickly as possible. Creative pieces do not require an abstract.

Practicing Anthropology welcomes suggestions for special editions on topics about applied or practicing anthropology.  Potential guest editors are encouraged to contact the editors and reach an agreement in principle about the topic(s) and theme of 8-10 articles for a full issue, or 4-5 for a partial issue.  Please submit abstracts, 1-2 page proposals, or samples of papers already written (e.g., conference papers).  After the agreement is reached, the special issue editor works closely with his or her colleagues on the papers making sure all submissions fall within the guidelines listed above.

The special theme editor will also work with the PA editor on the introduction and in selecting a cover photo for the themed issue.

PA is dedicated to publishing work from many different authors from different backgrounds and positioned in different projects and locations from new community researchers to senior researchers in the field. We especially encourage first time authors who are practicing anthropologists or work as community partners on projects that use ethnographic and mixed-methods research and practice. We are happy to work with new authors on developing ideas and manuscripts for the journal. Don’t hesitate to reach out to us with any questions at all. We are here to communicate with you even if you have no idea how publishing works.

We are interested in continuing to include content that demonstrates community-engaged work. Social scientists who decide to submit work to PA should carefully consider who they list as collaborators and co-authors. When we receive submissions from authors who are writing about collaborative work we will be interested in how you write about collaboration and how you include multiple authors in your manuscript. We encourage submitting companion pieces that are not “co-authored,” but are “companion authored.” Companion authorship means that two or more people author pieces that come together under one introduction. See PA Spring 2019 issue for examples of companion pieces.

We strongly encourage submissions from authors around the world who are from historically underrepresented and oppressed groups including but not limited to Black, Indigenous, People of Color authors, authors from across the gender spectrum, authors who are from regions of the world with few educational and publication resources, authors asking important critical questions about power and representation, and authors who have never published before.

Submissions are always welcome. We will notify authors of production deadlines once a manuscript has been accepted for publication.

All manuscripts must be prepared and submitted according to the Publication Manual of the American Psychological Association (7th edition).

References are placed in the body of the text. The citation is placed in parenthesis, with the author's name, year of publication, and page cited: (Stedman, 1982, p. 1322). Punctuation is placed outside the parenthesis. Specific page citation is mandatory for a direct quote. The page may be omitted if the reference is to the general theme of an entire work. If the citation refers to more than one work, list the works in alphabetical order by the author's name and separate the items by semicolons. For example, (Bolin, 1987a, 1987b; Goodell, 1985; Nesman, 1981; Pry et al., 2012; Zane & Smith, 2022).

The References Cited list should be alphabetized by the authors’ last names. Every item referred to in the text must appear in the Reference Cited list. Do not include any item in the References Cited if it has not been cited in the text. Multiple items by the same author are listed chronologically. Multiple items by the same author having the same publication date are alphabetized by the first word of their titles and distinguished by (a), (b), etc.

The layout of typical references is as follows:

Burton, F. (1978). The politics of legitimacy: Struggles in a Belfast community. Routledge and Kegan Paul.

Schaeffer, K. (2021, October 1). What we know about online learning and the homework gap amid the pandemic. Pew Research Center. https://www.pewresearch.org/fact-tank/2021/10/01/what-we-know-about-online-learning-and-the-homework-gap-amid-the-pandemic/

Please note the patterns of spacing, indentation, capitalization, and punctuation; also note the order in which items of information within a reference are placed.

For all other questions regarding the style of references—particularly such matters as government documents, unpublished reports, and materials in languages other than English, please consult the Publication Manual of the American Psychological Association (7th edition).

Direct quotations of 40+ words must be indented from the left margin. Do not use quotation marks. Give the reference for such a quotation in the sentence immediately preceding, if at all possible. Omissions in a quotation are indicated by ellipses (three spaced dots); the third dot does not substitute for a period.

The final authority on spelling will be Webster's Third New International Dictionary. In a direct quotation, however, the original spelling is followed, even if it is incorrect. An incorrect spelling is indicated by [sic].

Acronyms do not carry periods. Very familiar acronyms may stand without explanation (e.g., UN, USAID, EEC, WHO), but unfamiliar titles are written out in full at first mention, followed by a parenthetical acronym that is used thereafter, e.g., Strawberry Processing Advisory Board (SPAB). Always use the full name for the United States.

Numbers below 10 are to be spelled out; all others are expressed as numerals, including such constructions as 5,000 (rather than "five thousand"). If a number begins a sentence, it must be written out. When a number expresses a percentage, use % when it is preceded by a numeral; otherwise, spell out the word “percentage.” Monetary expressions are to be written as numerals and symbols (e.g., $8,000, not "eight thousand dollars"). Provide United States dollar equivalents for all other currencies, if at all possible. Single-digit centuries should be written as lowercase words, and double-digit centuries should be written as numerals (e.g., The Roman Empire fell in the fifth century. Rock and roll music was invented in the 20th century). A decade is referred to as "the 1980s" (not "the 1980's or "the eighties"). Use the abbreviation “p.” (for one page) or “pp.” (for multiple pages). When inclusive pages are cited, no digits are omitted [e.g., (Burton, 1978, pp. 164-179)].

For units of measurement, use numerals and abbreviate the units (e.g., "4 cm"). Note that the abbreviation should not include an "s" (e.g., "4 cm" not "4 cms"). Spell out the word when it is not accompanied by a numeric value (e.g., "…was measured in centimeters"). Use metric units whenever possible.