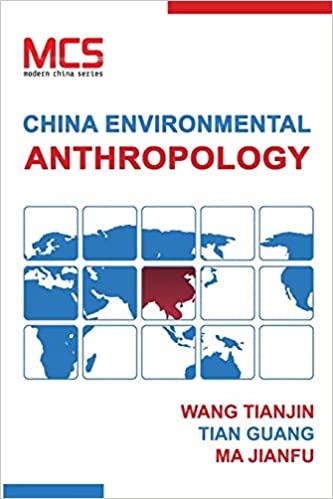 The fundamental law of sustainable development to human civilization reveres nature and protects the environment is never violated. An English academic work of “China Environmental Anthropology,” published by North American Business Press, Seattle, WA, USA, 2018, has illustrated a deep understanding of the related existing conditions. The authors are Professor Wang Tianjin at the Minzu University of China in Beijing, China; Professor Guang Tian at Huaihua University in Hunan, China; Professor Ma Jianfu at Northern Minzu University in Ningxia, China. Given the severe deterioration in the relationship between man and nature in recent years, the book is rich in information. It offers a useful benefit by clearly revealing the causes of the contradictions.

This book is a distinct viewpoint，rich in information, strong narrative, and vivid language. It provides clear information about social and economic activities, ethnic culture and customs, and changes in management systems in China and other countries that promote historical development. These things act on the natural ecological cycle, what kinds of complex events, how good or bad the change trends are. How can people act to build a beautiful environment and produce growth in our big home of the earth?

The book, which is ten chapters, reveals that some unscientific behaviors of human beings in the past decades have led to the serious deterioration of the natural environment and especially emphasizes the need to reform the outdated economic structure and change the ecological imbalance. The followings are some brief reviews of the book from two aspects only.

The English academic work uses authoritative data and typical cases to illustrate that China, as a developing country, on the whole, has explored and tried to manage the complex relationship between man and nature from many aspects. On the one hand, with the active leadership of administrative organs at all levels and the extensive participation of the masses, China has maintained territorial and ecological security and boosted productivity growth. The results are remarkable to some degree. On the other hand, with the disproportionate industrial structure, chaotic organization, and management in some parts, China has serious land degradation, desertification, and ecological imbalance.

This book makes it clear that land desertification threatens all nations. And such crises still exist today. According to the United Nations, global land desertification in recent years is an expanding rate of 50,000-70,000 square kilometers per year, having turned 21 million hectares of productive land into desert. 35 % of the world's landmass, 20 % of the population, and more than 100 countries are threatened by desertification. The direct economic losses are $423 trillion a year.

The phenomenon of desertification in China is worrying. A nationwide land survey conducted by the Chinese government showed, by 2014, China's desertification land was 2,611,593 km2, accounting for 27.20 % of its territory. The country’s desertified land was 1,721,175 km2, accounting for 17.93 % of China's total land areas in the same year. The main reasons for ecological deterioration are disorderly economic behaviors such as over-reclamation and over-logging, overloading animal husbandry, over-utilization of water resources, etc. From 2009 to 2014, the cultivated land in desertified areas and sandy land had increased by 3.60% and 8.76%, respectively.  The average overloading rate of livestock in China's counties of pastoral areas reached 20.6 percent in 2014(Tu, Li, and Sun, 2016).

The same is true in other developing countries worldwide—a recent series of surveys by prof. Gebreyesus Brhane Tesfahunegn, Aksum University, Ethiopia, in the Dura sub-basin of the northern country, also showed that desertification had been very serious there. And the vast majority of respondents said, “significantly higher proportions of respondents perceived that deforestation (100%), followed by overgrazing (98%) and improper soil management (97%) are the main direct causes of degradation” (Tesfahunegn, 2019).

The book concluded that land desertification manifests underdevelopment caused by both social and economic factors. Desertification changes the solar radiation albedo of the land surface, reduces vegetation and soil organic matter, lowers carbon storage capacity, affects the carbon budget, and exacerbates climate change seriously. At the same time, climate change, in turn, could exacerbate land degradation in many different methods, reduce yields of wheat and corn, and trigger food shortages. It is a vicious circle that threatens the survival of humanity.

The book expresses that the urgent and systematic restoration of human-damaged ecosystems is now a global challenge. The key action is undoubtedly to change the ways of production formed in the old age of the big machine industry. It amplifies that history has repeatedly demonstrated that a nation must first carefully organize the mode of production at the right time to survive. It is an important measure that the people must change the agricultural and animal husbandry production, creatively build the harmony between man and nature, and then release the maximum production capacity. Only in the new economic system can the country and nation move towards prosperity and prosperity. The book also puts forward some meaningful suggestions, including training and improving rural farmers' scientific production skills, establishing an ecological farmland farming system, implementing fenced animal husbandry on grassland, etc.

This book shows how to establish a special compensation mechanism on the Qinghai-Tibet Plateau, which is of great theoretical and practical significance. The Tibetan and Qiang ethnic groups, who have lived on the Qinghai-Tibet Plateau for generations, plant trees and grass on a large scale. Those vast forests and grasslands are the water sources of the Yangtze and Yellow Rivers，and the green vegetation absorbs carbon dioxide and produces fresh oxygen under photosynthesis, which reduces greenhouse gas emissions. That means river water and oxygen are products of abstract human labor. Hundreds of millions of masses in the middle and lower reaches of the Yangtze and Yellow Rivers use water to live and produce, which means they enjoy the labor products of the Tibetan and Qiang ethnic groups. The exchange of equal value is the fundamental law of market economic prosperity, which must not be violated. Those rivers and oxygen must be given separate commodity status and traded in markets regulated by the Kyoto Protocol to the United Nations Framework Convention on Climate Change (or the Kyoto Protocol), known as international carbon sinks trading.

With the Kyoto Protocol officially coming into effect in 2005, commercial trading of the global carbon emission rights has been carried out in torturous exploration. Meanwhile, this kind of trading has gotten some better benefits. Market trading is an important way to reduce greenhouse gases, mainly carbon dioxide equivalent emissions from artificial uses such as oil and coal. The United States, European Union, New Zealand, and other places have established national or regional carbon emission trading markets. The establishment of the compensation mechanism for the Qinghai-Tibet Plateau is one of the many efforts that China has made in this regard.

The book explains profoundly that many facts show that reducing greenhouse gas emissions is an inherent need of social people and economic production and is an international, structured, and systematic trend. In particular, it (1)is impossible for minority countries to achieve，and (2)beyond single system components or partial carbon trading phenomena.

On 21 August 2021, Chinese President Xi Jinping reaffirmed the solemn commitment to the international community by delivering a video statement to the General Debate of the 76th Session of the United Nations General Assembly from Beijing: "China will strive to achieve carbon peak by 2030 and carbon neutrality by 2060." President Xi also bluntly said： "It need make a strenuous effort" (Xi, 2021).

It can be seen from several cases described in the book that the carbon trading channels are not smooth, enterprises do not have the willingness to participate in the trading, and the professional and technical personnel are lack. The failure of the market supervision mechanism is, to some degree, all of which are the obstacles to carbon sink trading in China.  Chinese administrators, business, and academic circles have clearly understood that a country must learn from the experience of other countries and join forces around the world to reduce carbon emissions to achieve "carbon peak" and "carbon neutral" goals. Through in-depth international cooperation and active action against climate change, we reduce the serious threat posed to human civilization by ecological imbalance.

In a word, this academic work focuses on illustrating typical cases and profound lessons of coordination between human production and ecological cycle in China and the economic development experience of other countries, which is worth reading and further exploration by professionals and college students.

Xi, Jinping (2021). Strengthen Our Confidence to Tide Together Overcome the Difficulties and Build A Better World——Statement at the General Debate of the 76th United Nations General Assembly by Video from Beijing. Xinhua News Agency, http://politics.people.com.cn//n1/2021/0922/c1024-32232511.html