Jaibazul is a piece of private property in the northern coast of Colombia in the Necoclí municipality of the Urabá region. The site was originally an isolated private farmland situated in the Colombian forest and established by a Lebanese immigrant in the early twentieth century. However, since the rapid development of the region, much of the forest in the area has been destroyed for cattle ranching, leading to a rapid decline its its biodiversity. Jaibazul, however, has done the opposite. Since the death of the original occupants, the property of Jaibazul has been inhered by a descendant of the founding farmer, a man who asked to remain known only as Jorge. For the last five years, Jorge has slowly begun a one man reforestation project, planting more than one thousand trees and reforesting the majority of the 30 acre property. Because of the clandestine nature of his project, Jorge has had difficulties attracting scientific research to the area. So upon contacting him, he invited me (accompanied by my father) to come down to the site and has allowed me to begin conducting an independent pilot study or the area. The purpose of this article is to primarily draw attention to a relatively novel research site with considerable potential, at behest of the primary informant. 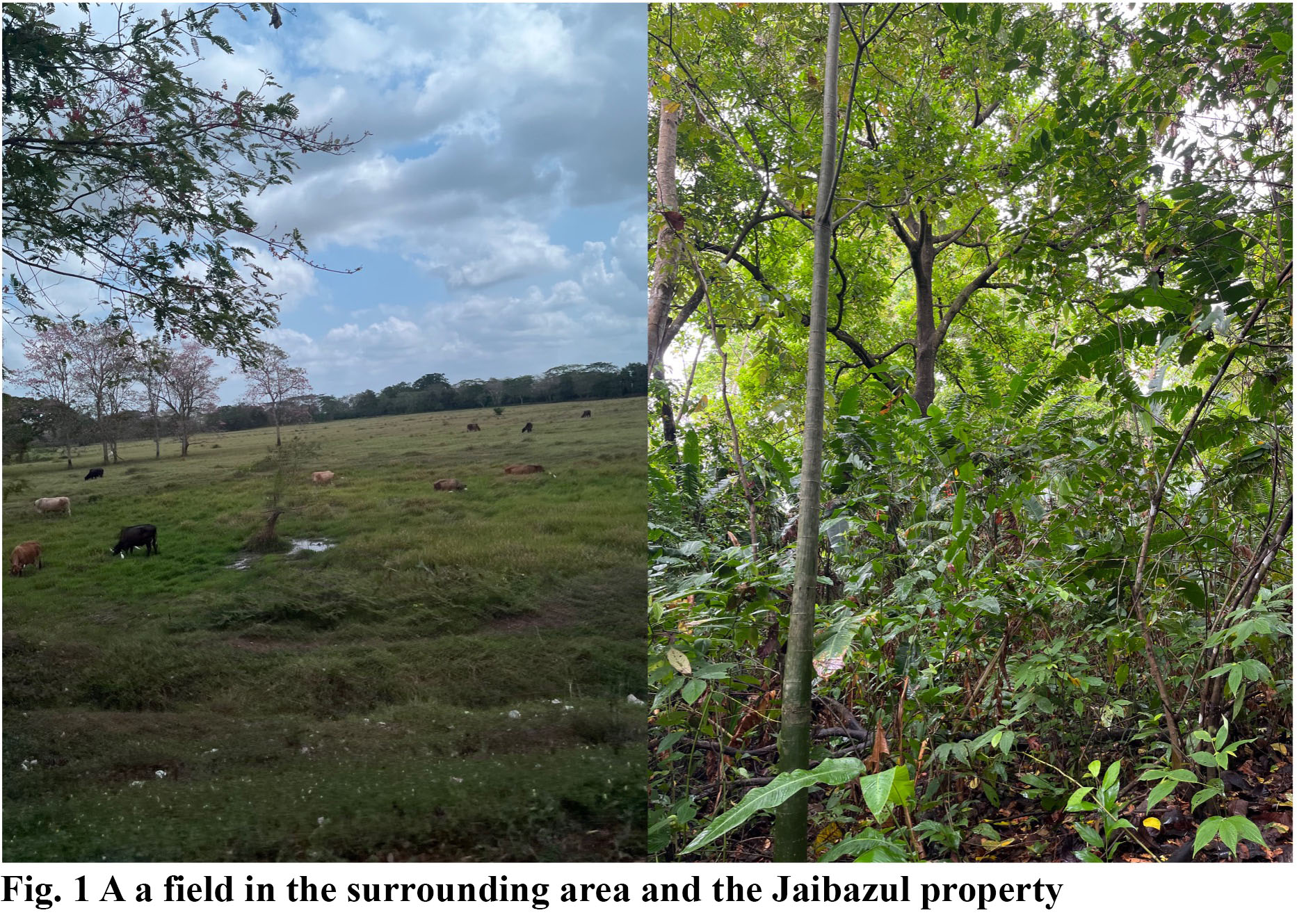 As discussed previously, Jaibazul, is situated in the Urabá subregion of the western Colombian state of Antioquia. This area has historically been notorious not only for is considerable poverty, but also for regional   violence. The social structure of the area is based around a landowner and peasant-farmer division that has led to massive inequality for large portions of its population (Colombia Reports, 2019). Additionally, because of its proximity to the Central American country of Panama, and convenient marine access from the Gulf of Urabá, it is a considerable hub for illicit activities such as drug trafficking (Colombia Reports, 2021), even sharing its namesake with a powerful Colombian paramilitary and drug trafficking organization, the Clan Del Golfo (formerly the Urabeños). Unfortunately, these sensational stories have aided in hiding an additional crisis in the region’s biodiversity. Much like other areas of northern Colombia, Uraba is at major risk of ecological collapse (IPBES, 2019). According to a report by the Intergovernmental Science-Policy Platform on Biodiversity and Ecosystems Services report, Urabá ranks among the highest parts of the country in terms of risk of conversion of its forests to commercial farming (IPBES, 2019). This is likely from a combination of the heavily embraced cattle industry, which requires vast swaths of land to be cleared for grazing, and the general inaccessibility of the region, making government intervention all but impossible (Colombia Reports, 2019).

Unfortunately, the region is host to a variety of engaged species of plants and animals that are not found anywhere else on earth. Jaibazul is one of these areas. Originally a commercial coconut plantation, Jaibazul, the local name for a species of blue crab found in the area, has become the site of a biological and social phenomenon. Along with the help of a farmhand, Eniel,Jorge has managed to convert his field into a now unrecognizable forest. He has planted more than 5,000 trees over the past 10 years and as a result has changed the entire ecosystem of his property. What was open plain has now been changed to a tropical dry forest that is home to 18 species of mammals (including the critically endangered cotton top tamarin), 6 species of crustaceans, more than 50 species of birds including several migratory species , 14 species of reptiles and 2 species of amphibians.

As one could imagine, Jaibazul is extremely remote; the property is adjacent to the town of El Lechugal, which itself is a 24 kilometer drive through mud roads from the nearest city of Necocli (Jaibazul Website). This area is already the subject of heavy conservation efforts by local organizations because its beaches are the nesting site of the critically endangered hawksbill sea turtle  (Eretmochelys imbricata) and the vulnerable leatherback turtle (Dermochelys coriacea) (SWOT, 2012). However, its terrestrial wildlife has been largely ignored, and as a result, there has been little done to prevent the massive amounts of deforestation that continue to occur around Jaibazul. 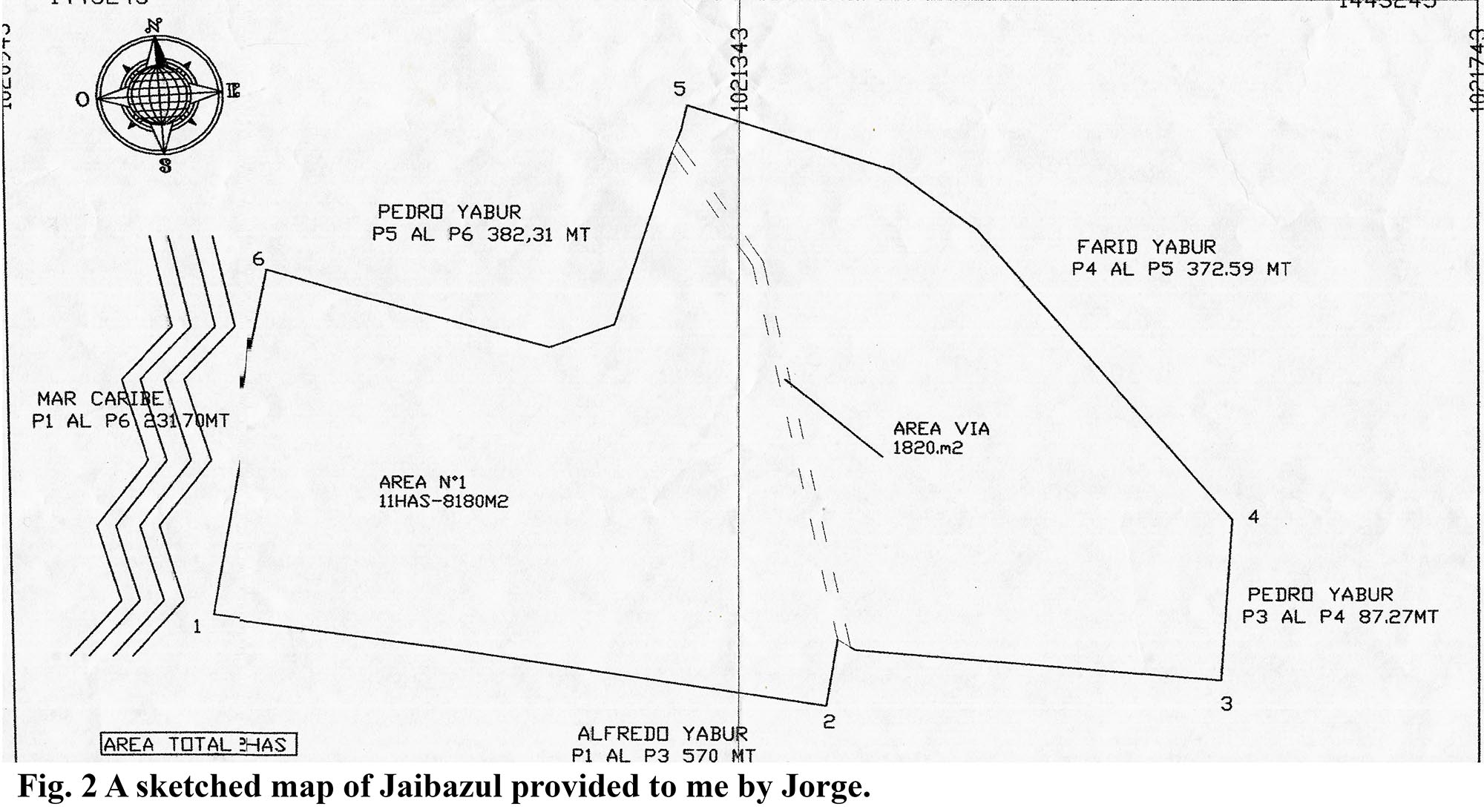 The site itself, as previously mentioned, is about 30 acres in area and is bisected by a dirt road. It is mostly flat, but contains three distinct ecosystems inside it: a small mangrove swamp, a beach area, and the tropical dry forest. It is nearly entirely surrounded by cleared forest that have been converted to fields to graze cows, and cut down as wood for the logging industry. Because of the rapidly declining environment, one unforeseen benefit of Jaibazul is that it has become a refuge for the wildlife that once lived in the surrounded area.

The declining habitat that surrounds Jaibazul has given it a magnetic quality that naturally caused the newly planted forest to develop an ecosystem composed primarily of refugee animals. While there have been close to one hundred different species described in and around the property, arguably the most remarkable development is the immigration of the cotton-top tamarin (Saguinus oedipus). This minuscule primate is not larger than a cat and is easily recognizable from the massive hair that protrudes from its saggital crest. While once abundant, their populations were decimated from the exportation of close to 40,000 tamarins for biomedical lab research (Proyecto Titi). Despite the halting of this practice by the Colombian government, factors such as habitat loss and the illegal wildlife trade, the species still remains critically endangered (IUCN).Thus, it was much to my surprise to learn that Jaibazul is the permanent home of three distinct families of these primates, with a fourth family having been occasionally spotted on the periphery. 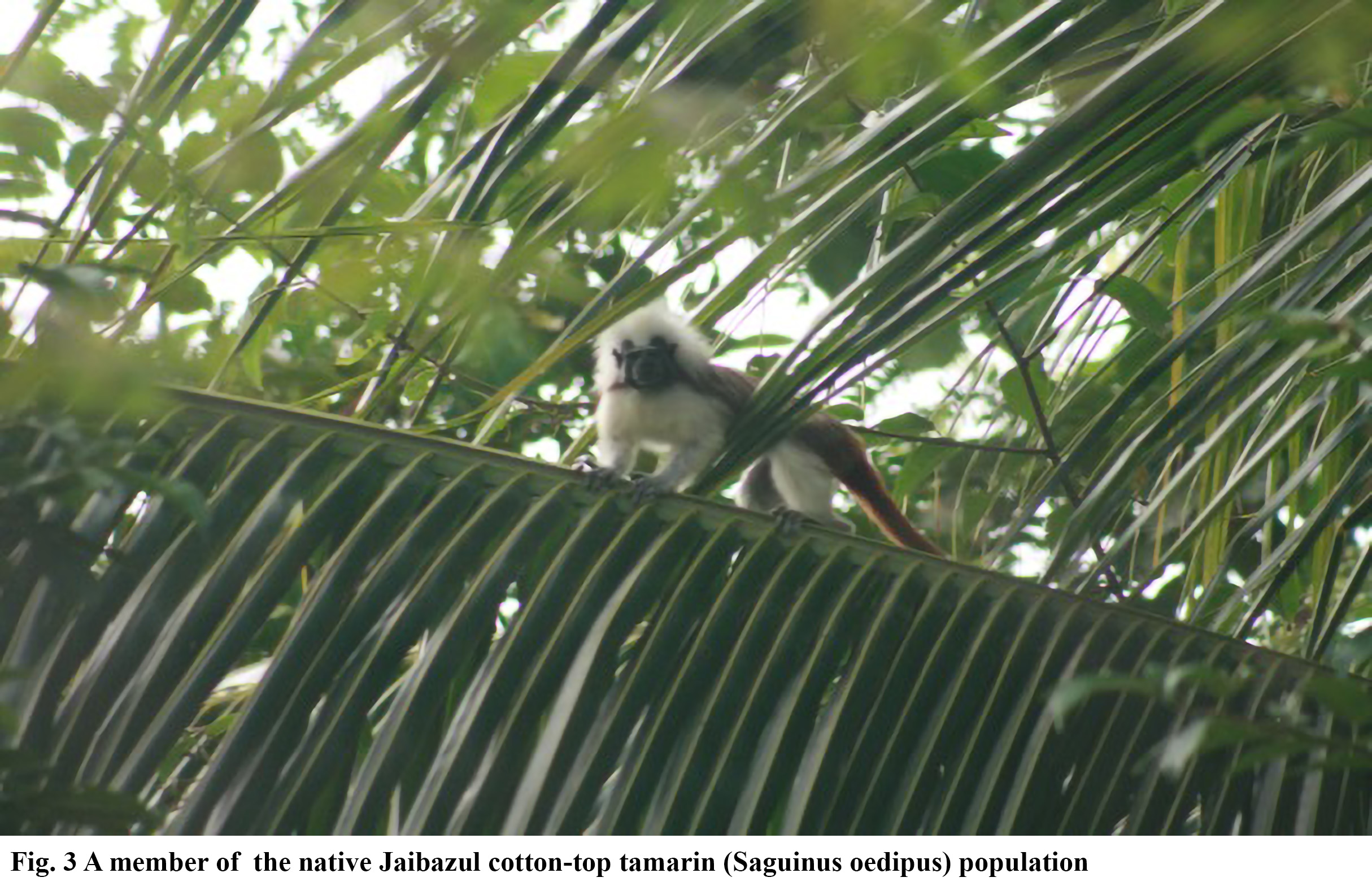 Upon arriving, I learned from Jorge’s farmhand, Eniel, that there were three different families of cotton-top tamarin who called the site home. The first family, consisted of four members, and resided in and around the path leading into Jaibazul. The second, which has two members, occupied forest near the mangrove and up to the larger dirt road that bisected the property. The third, and most elusive family, composed of three cotton-top tamarins, has claimed territory on both sides of the road, and was crossing via the trees that have stretched across the road from above. A fourth family, which I have not been able to observe yet, lives outside of the property lines of Jaibazul, but will occasionally venture in to search for food, according to Eneil, who is the only person to have seen them so far.

Despite the abundance of primates in such a small area, the difficulty of the terrain, paired with the small size of these primates, made finding them very difficult. As a result, I suspect that they had very little contact with humans besides my family, Jorge, Eniel, and the handful of researchers who Jorge has convened to visit the property. Every encounter with the tamarin was generally unfriendly. All three families responded to initial sightings of us with loud alarm vocalizations and attempts to distract us, usually with one individual member acting as a “decoy” while any remaining tamarins fled. This lack of socialization made long observations all but impossible, as after three to ten minutes, the animals would flee to parts of the first that were impenetrable via ground path.

However, by the end of my short time there, I observed a shift in the behavior of the largest family that encouraged my outlook on future observation. Because of their proximity to the path leading into the center of Jaibazul, interactions between all of us and the primate family were relatively common. Over the course of a week, I had noticed that not only did the animals take considerably longer to flee than our first contact with them, but they were visibly more inquisitive, with some individuals approaching us more to get a better look. 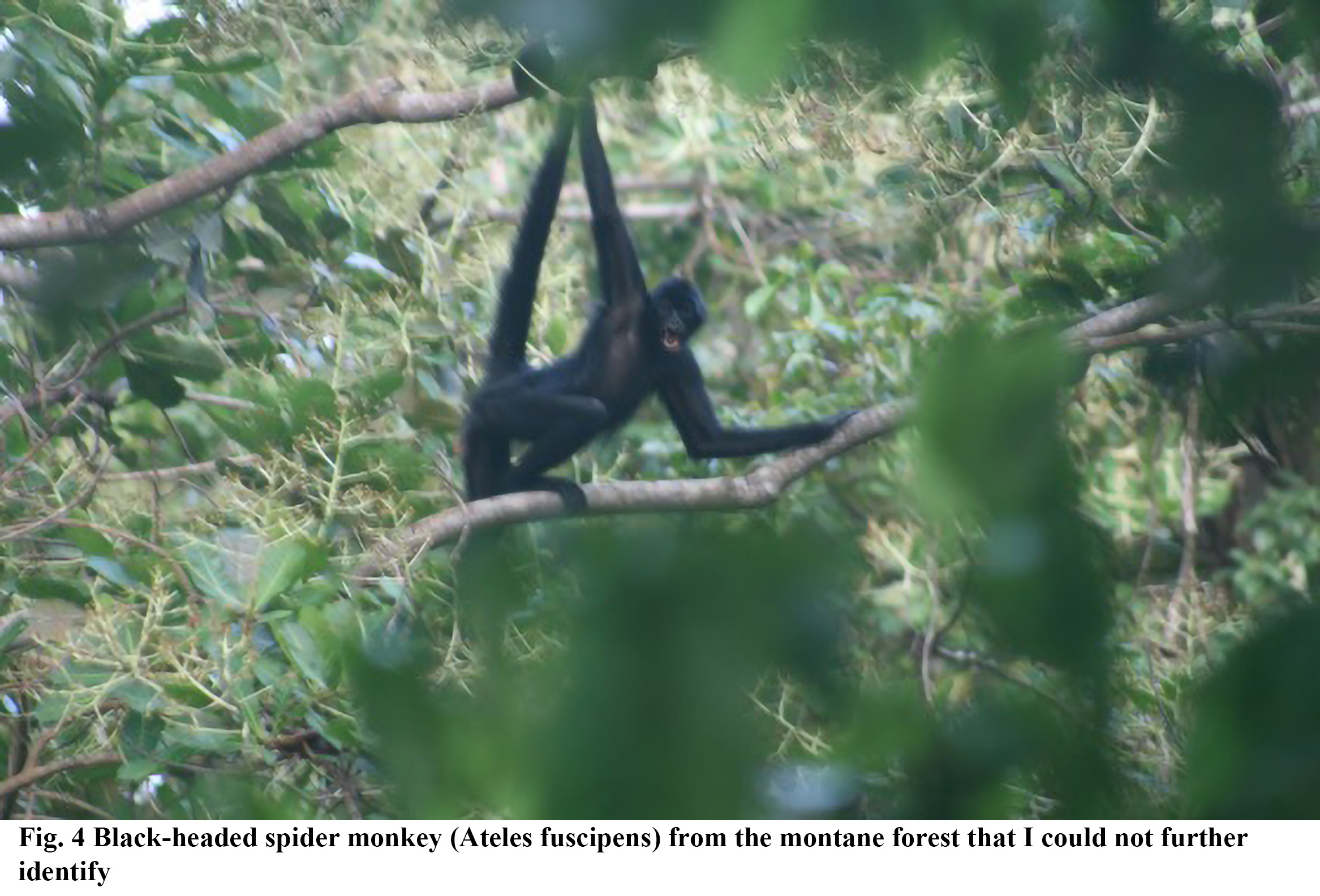 While the tamarins were the primary focus of my time there, the area around Jaibazul is host to much more than just these four families of primates. About one kilometer away, a  large mountain is the site of a relatively constricted forest. Because of its steepness and height (I was told it was about 1.5 kilometers tall)  farmers have not been able to develop the land with the same intensity, and as a result most of its foliage remains untouched. This additional island-like forest has acted as a magnate for wildlife much in the same way as Jaibazul, and also has a high density of primates. While I spent relatively little time at this secondary site, I was still able to observe huge numbers of animals. A three hour hike up and around s section of the mountain yielded observations of a family of colombian red howler monkeys (Alouatta senicus), a family of white-face capuchin monkeys (Cebus capuchinus), and a foraging group of an unidentifiable species of black-headed spider monkey (Ateles fuscipens). Despite not being on the direct property of Jaibazul, they are easily accessible to observe and are, in fact more vulnerable because of the unprotected state of the forest. While I was not able to observe them as much as the tamarins of Jaibazul, this is not a result of lack of interest in these populations of primates.

Unfortunately, as an undergraduate, I have been limited in my time and resources in pursuing the project. I have only been able to spend about a week in total at the site, during my time off from Notee Dame University in spring. However, with graduation rapidly approaching, I hope to return and continue conducting research in the area and help in Jorge’s conservation effort. This site is remarkable not only for the fact that it is host to a variety of critically endangered species who seem to have began to thrive in the area, but for its human component as well. Jorge is not a naturalist and not a scientist of any formal convention, yet he has managed to create an ecological miracle. He is living proof that conservation cannot happen without boots on the ground, and genuine engagement with local communities. While the site is very small at this point, its existence alone shows a potential for further conservation of the region, as well as a possible shift in local attitudes and income opportunities.

On behalf of Jorge, I invite anybody interested in Jaibazul to contact him and donate at https://jaibazul.com/en/