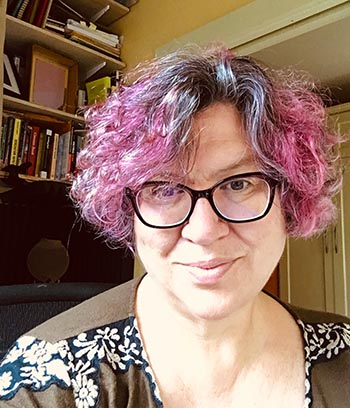 My capstone project, Diagnosis Culture: Culture and African American Maternal Health in Houston, uses a cultural lens to recognize how maternal health disparities in Harris County and the city of Houston, Texas are the result of unreconciled conflict within and between the practice of medicine and Black communities. The project also explores possible ways insights gained from the emic experience of both providers and mothers can be used in a cultural sustainability framework by communities, providers, and cultural brokers towards creating partnerships between medical providers and community members to improve outcomes for all concerned.

Here is the rub: I am not Black. I am not a mother. I’m a middle-aged White woman living in the Historic Houston Heights, which is one of the more affluent neighborhoods in the city. But Black maternal health found me, rather than the other way around. It is, I believe, the best way to find a meaningful research project.

I was truly stumped when it came to define my capstone project for my MA in Cultural Sustainability in late 2018. Thankfully, a member of my committee reminded me of Soyini Madison’s excellent book, Critical Ethnography. Chapter 2 became my lifeline. On page 19, in the “’Who am I?’: Starting Where You Are” section, Madison says “The experiences in your life, both past and present, and who you are as a unique individual will lead you to certain questions about the world and certain problems about why things are the way they are.”[1]

My life experiences connect me intimately to both the practice of medicine and the experience of being a patient wrestling with bias in medical. And, because of my work as a community leader as the head of a local Houston history nonprofit, I was also connected to the power of impactful allyship with Houston’s Black community. In retrospect, it might seem I was primed to do this project.

First, maternal health in America is an embarrassment. All mothers in the U.S. are at higher risk than women in any other developed nation of either dying or being severely debilitated in the year following pregnancy: Between 1999 and 2017, the mortality rate of all women in the United states—regardless of ethnicity — rose from 9.9/100,000 live births to 30.7/100,000 live births.[2] And that’s just deaths; look at severe life-threatening complications resulting from pregnancy and the numbers explode with an additional 500,000 mothers annually suffering from severe health complications (which are professionally referred to as “severe maternal morbidity” or SMM) in the year following pregnancy. And that’s across all ethnicities. regardless of race.[3]

In just Texas, which is near the bottom of the list of states for maternal mortality and morbidity, between 2008 and 2015, SMM rates rose 15% across all ethnicities. Getting even more local, in Harris County SMM rates were 53% for all ethnicities, which is more than four times the state’s rate[4] – an appalling number, but sadly not at the bottom of the state’s statistics for this issue. Regardless of color, women in Harris County are at a greater risk of either dying or being disabled following pregnancy.

Adding insult to injury, once the numbers are broken down by ethnicities, Black women, especially in particular Houston metropolitan area ZIP codes, are between 3 and 5 times more likely to die or be debilitated due to pregnancy-related issues than their sisters from other ethnicities.[5]

Black women are suffering, but astoundingly their voices were nowhere to be found in my research in 2018 of discussions around the impact of cultural and racial bias in maternal healthcare in Houston, which is home to the world-renowned Texas Medical Center. I did a thorough search, but everywhere I looked only medical professionals in the highest echelons of our medical institutions – which includes two world-class medical schools and several nursing schools – were invited to small closed-door meetings on the subject.

Regardless of the public or social issue, allyship and community voices in the development of solutions is vitally important. This is where not just story, but active, informed involvement by those affected and their allies is vital. As Gandhi said, “Whatever you do for me but without me, you do against me.”

Tanya Debose, founder of the annual Preserving Communities of Color (PCOC) conference held annually in Houston, was and is a friend and professional collaborator. She and I were fellow board members for the Houston History Alliance and when I became board chair and volunteer executive director, she and I and our board created city-wide history conferences that shifted the focus from the traditional single-story of the heroic businessmen to the city’s rich cultural history. Tanya went on to found the PCOC following our adventures together and she was instrumental in my finding a research topic and connecting me within the Black community.

Tanya charged me with applying my degree towards the creation of not just an ethnography project researching perceptions of both sides of the medical interaction involving Black mothers, but in the programming of a day-long health equity discussion for the 2019 PCOC.

My decision to get an advanced degree involving ethnography was about my belief in the power of story. Statistics only tell a very small part of the story, which is the part that can be quantified. But human stories are needed to truly understand, and the practice of Cultural Sustainability, which brings together and provides avenues for the application of the practices of the fields of anthropology, folklore, and sociology – demands that the communities I work with are in the driver’s seat and that I be accountable for my part in the story.

I reached into my informants and subject matter experts to create the programming committee. I also built a partnership with Doctors for Change, an advocacy organization local to Houston. Our 12-member committee met bi-weekly for over seven months around my kitchen table. I cooked and they provided all of the wine. It consisted mostly of female Black medical professionals, public health students, and concerned community members, a Latino male from Doctors for Change, and two White women, myself and another public health student.

We became a sisterhood (along with the two male members) and everyone reached deep into their Rolodexes to collaboratively create the day-long program that included a small public performance of stories from my ethnographies, breakouts exploring recruitment and retainment of people of color in medical schools, mental health and people of color, and nonprofit success stories. The day culminated in a collective session looking at the future of providing healthcare structural and cultural competency in Houston. The conference included leaders from the Texas Medical Center and Houston’s Black communities and was held at the historic Good Hope Baptist Church, which was the site of Barbara Jordan’s funeral in 1996.

The ethnography project, which was the primary Capstone project, was an equally large undertaking: I conducted 15 hours of interviews with a total of 11 Black mothers, Black obstetrics-focused medical providers who also happened to be mothers, and non-Black obstetrics-focused medical providers. I gleaned a number of themes from the stories, then applied Systemic Racism Theory[6], which states that systemic racial oppression has created a distinctive social world that unequally benefits a particular segment of society physically, economically, social, and culturally, to suss out the major themes. As the theory’s founder, sociologist Joe Feagin states, systemic racism is “a material, social and ideological reality” that is embedded in the warp and weft of American Society and it operates in the background of major U.S. institutions, including the entire field of medicine.[7]

I ultimately finished the monster project and graduated from the MA in Cultural Sustainability (MACS) program at Goucher College in Maryland this past May, just as COVID was shutting down the world. I’m not a fan of the disease but it did give me a bit of a breather after an emotionally impactful year. I’m proud of my work and am still connected with my friends from our programming committee. Apparently, my peers were also impressed; my research and capstone report won my program’s annual Rory Turner capstone prize!

[3] Ortique, Carla, “Maternal Morbidity and Mortality Seeking Solutions and Establishing Collaborations: How Do We Get Back to Trust.” Lecture, Preserving Communities of Color Conference, November 1, 2019.